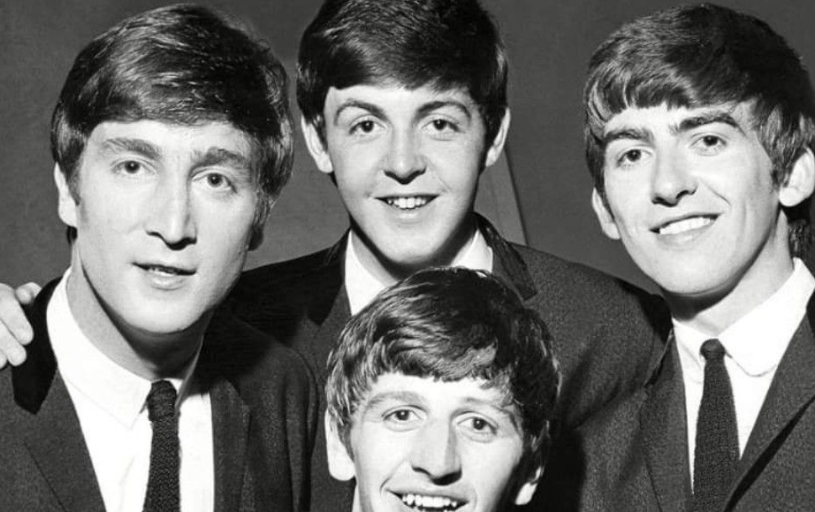 My sister has a crush on Ringo, that’s who — or at least she did when we were kiddos (“I liked the underdog!”), and once swore she saw him driving a mac truck on the highway (she was five, we laughed hard).

These are the kind of anecdotes that populate our childhood, and there are so many more where those came from. Our Beatles memories are deep. One year, as a gift to her, I constructed a board game painstakingly painted by hand — loosely modeled on Candy Land — with destinations such as Strawberry Fields.

You could actually play this game:

Roughly, using questions and answers that I’d copied onto index cards from a small novelty book that told stories about nearly every Beatles’ song and why it was conceived. My aunt got pissed that we knew more than her, which we relished.

The Beatles are my friends, that’s what it feels like, and I know it feels that way to so many others that the odds of one other person reading this line and agreeing with it is quite high despite the fact of my blog’s historically low readership. Like any one of us, I knew them through their characters on the screen (Hard Days Night and Help!, in particular), but I also knew them through the nuances.

John counting down “sugarplum fairy, sugarplum fairy” on the demo version of “A Day in the Life,” or sneaking in “and then a na” under that emotive, nonsense-worded anthem that carries “Hey Jude” — a little signature snark, but still lovely, as our John was.

It feels like a bit of a spiritual rip off in some way that everyone (give or take a few) feels this way about The Beatles so they can’t be your favorite band, but of course, they really are your favorite band the way your sister is your best friend.

They just are Crush.

The Beatles feel so easy. So always-good. So instantly recognizable to the initiated.
Ever since my cousin grew up to play every song in their catalog on piano, a group singalong has broken out each holiday gathering. Their music lives among our love. It was the soundtrack to my most formative relationships.

Even now! My brother-friend, the rapper and DJ, texts me as we swap Beatles stories, in some bizarro other world I bet our parents would have been friends.
Indeed, my friend. We are the offspring of Beatlemania!!!

But I didn’t know them like this, the way they appear in Get Back, the new six hour documentary in 3 parts that I watched this past weekend with such emotional investment I surprised myself. I hate to make statements like “the best” because it’s so boring to compete great art against itself, but given the familial nature of this particular soundtrack I do begin to wonder: have I taken for granted the immense and lush and shapeshifting success of The Beatles’ musical career as just a fact among facts of this world?

Consistent quality of their creative output for the years they lasted?
I mean how rich they were in the currency of just flat out wonderful songs that I want to listen to again and again — just consider the sheer amount of times I want and have wanted to hear them!
HOW DID THEY DO THAT?
But really. How? And I mean in such a sustained way.

Let me scramble the timelines a little bit, for fun. It is now last week, just for this paragraph. My sister-friend, the rockstar, laughs in the other room where she has taken a phone call. I am tucked in bed reading, where the other half is still warm from her sleep. Our bellies are full of Turkish candy and coffee. Our partners are across the world.

A few days earlier she was across the world, too, and I opened my eyes to this text message in New York, seven hours into her day: I woke up this morning from a dream where I was hugging you. I felt your hair on my face. That sentiment lingers in my psyche and keeps a flame warm inside me.

From this recent-past self stance:

I call past-past bullshit on Lennon when he raked Paul publicly after the group broke up. In Peter Jackson’s retelling anyway. I could see that those two loved each other so deeply that no one could ever take it away. As obvious and clear as the need for a new pair of socks. That kind of love is certainly not uncomplicated (or full of holes). But all that karmic investment always holds the potential. However elusive — for the love relationship to be full of creative accelerant and eternal by nature.

Who Has a Crush on Ringo