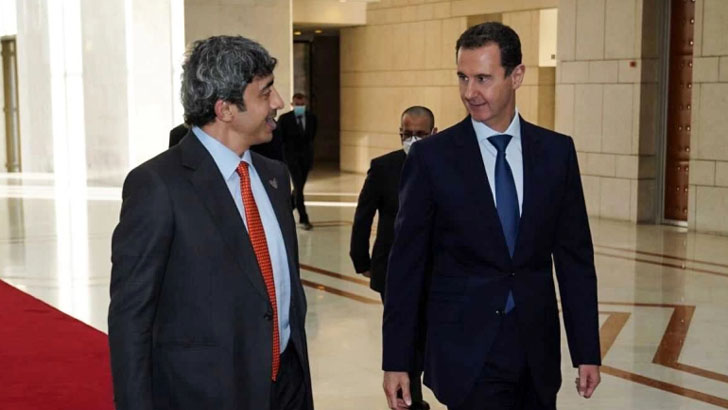 After more than a decade, a UAE foreign minister visited Syria on Tuesday.

The United Arab Emirates severed ties with Syria in 2011 after foreign-backed terrorist violence began in Syria and began supporting extremist terrorist groups, including IS. News from Al Jazeera.

According to the Syrian state news agency SANA, UAE Foreign Minister Sheikh Abdullah bin Zayed Al Nahyan visited the capital Damascus on Tuesday. He was accompanied by a high-level political delegation from the United Arab Emirates.

During his visit to Damascus, the UAE Foreign Minister met with Syrian President Bashar al-Assad. The two sides discussed issues of mutual interest and ways to enhance relations and cooperation in various fields.

President Bashar al-Assad stressed at the time that relations with Syria have been very close since the time of Sheikh Zayed bin Sultan Al Nahyan, the founder of the United Arab Emirates.

President Bashar al-Assad praised the UAE’s efforts to re-establish relations with Syria, saying the steps taken by Abu Dhabi were correct and realistic.

A few days ago, a Syrian delegation visited Saudi Arabia. Earlier, efforts were made to establish Syrian relations with Jordan. Observers say Syria’s renewed ties with Arab countries will make it easier to eliminate extremist terrorists in the country.