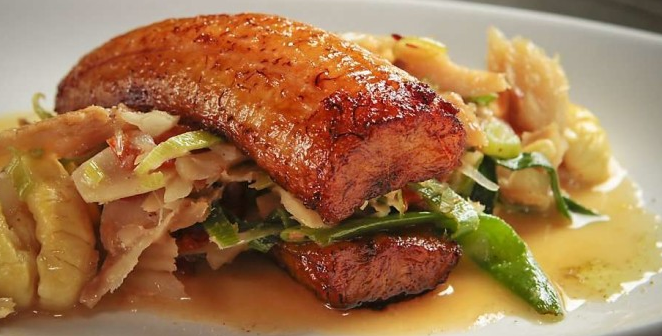 Known not only for its sun, sea, beaches and sand, Barbados is also widely regarded as the “Culinary Capital of the Caribbean”. With its rich choice of Cuisine, it is characterized by strong spicy combinations of fresh lime juice, thyme, chili peppers and parsley. Barbadian cuisine, commonly known as the Bajan Cuisine is a mixture of African, Indian, Irish, Creole and British influences. A typical meal, usually served with one or more sauces, consists of a main dish of meat or fish, normally marinated with a mixture of herbs and spices, hot side dishes, and one or more salads.

Cou-Cou, a delightful national dish of Barbados is prepared using cornmeal grain and fresh okra, or breadfruit and green bananas, then topped with a variety of tomatoes, onions and peppers.

This amazing combination is of course a mouth-watering and favorite of proud Barbadians far and wide. Usually, in Barbados it is served accompanied by flying fish.

Barbados is called as the “Land of Flying Fish” as it accounts to about 60% of all the fishes landed on the Island. Flying fish is a huge part of the country’s cultural identity and is mostly served with the country’s national dish, the Cou-Cou.

Flying Fish is in fact one of the national symbols of Barbados and features prominently on national artifacts like coins and local artwork. Anyone who has ever tasted this little local delicacy finds themselves hooked on its unique flavor.

This little fish is one of the defining features of a typical Bajan meal served either steamed, fried, pickled, barbecued, in between salt bread or with a side of our infamous Cou-Cou.

Macaroni Pie, sometimes referred to as the island’s unofficial National Dish or simply a ‘Pie’ is a perennial favourite and a rich baked version of mac and cheese. Macaroni pie tastes a little different everywhere you get it with a fabulous cross between casserole, macaroni and cheese, and spaghetti.

Macaroni pie is among the most popular and delicious dishes in Barbados as well as the Caribbean. It is commonly consumed as a side dish along with fried fish in Barbados. It is also prepared as a spicy dish, using spices such as black pepper, curry powder and hot sauces.

Fish Cakes are perhaps the most popular dish in Barbados, found on almost all menus, from 5 star hotels to even street side vendors. Consisting of filleted fish or other seafood with potato patty, it is sometimes even coated in breadcrumbs or batter, and fried to golden perfection.

A most delight version of the Bajan cutter is the ‘Bread and Two’ which includes two fish cakes, a slice of a cheese and obviously, pepper sauce.

The Top 4 Delicacies of Barbados