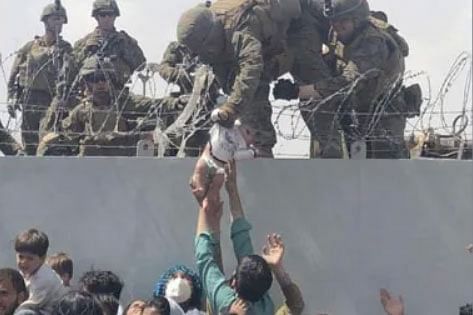 Two-and-a-half-month-old baby Sohail was separated from his parents in the Kabul airport area two and a half months ago. The parents put the child in the arms of the US Army to keep him safe from the hustle and bustle of the people in the airport area.

Thought, this separation is fleeting. You can pull the child to your chest as soon as you enter the airport by pushing the crowd. However, it did not happen. Mirza Ali Ahmadi and Suraya could not find the child even after two and a half months. They do not know where the child is now. Baba Mirza Ali is looking for him. And mother Suraya is counting the hours waiting to pull the child with her heart. News Reuters.

Large numbers of Afghans flocked to Kabul airport to flee the country after the Taliban seized power recently. They tried to get on the plane in a hurry. On August 19, Mirza Ali Ahmadi, his wife Suraya and their five children were caught in a rush near the gate of Kabul airport. They were worried about the youngest child. The couple was thinking about how to handle the two-month-old baby in the crowd. Suddenly, a US soldier extended his hand of support to them from the side of the wall.

From the top of the wall, the army wants to know from Mirza Ali whether they need any cooperation. The Ali Ahmadi couple were then just 18 feet from the airport entrance. They thought that rushing in could hurt a two-month-old baby. Rather, the risk can be avoided if the child can be handed over to the soldier from the side of the wall. They also assured the mind that it would not take much time to reach the distance of only 18 feet without it. That’s what you think.

Mirza Ali passed the child over the wall to the soldier. But they could not reach him as fast as they had hoped. More than half an hour later, the Mirza Ali Ahmadi couple and four other children were able to enter the airport. Once there, they started looking for their youngest child Sohail. But he could not be found anywhere.