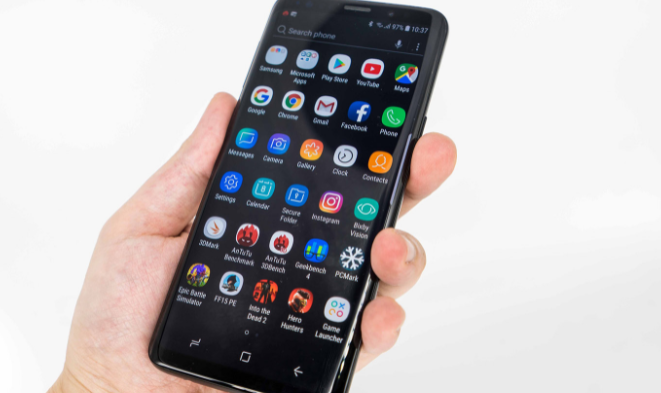 It’s been a busy six months for cell phone .

First came Apple with the iPhone 8 followed by the highly awaited iPhone X. Google chimed in with its Pixel 2. Now it’s Samsung’s turn to join the party.

The new Samsung Galaxy S9 and S9+ are ready for your chatting, texting and viewing pleasure.

While the phones are not “game changers” they do represent some large steps in improvements, ones that Samsung says matter most to consumers.

The phones are the same size as their predecessors, the S8 and S8+. The screens are slightly bigger and brighter.

An advanced camera is on-board along with stereo speakers Evolutionary Than Revolutionary.

Like other Samsung phones the S9s are water resistant. They include an infinity display, a headphone jack and wireless charging.

Better audio is promised for audio streaming and the video can be made slow, no we mean really slow. Slower than that actually.

Cell phone cameras keep getting better and better and the S9s click along the same path. Like their recently upgraded competitors the devices take sharper photos in more challenging light.

The phones have a dual camera Evolutionary Than Revolutionary

The improved camera will help with your video shooting. In fact there is a slow motion tool that can take videos 32 times slower than normal.

The slower video can give you some unusual shots. Whatever the result Samsung will automatically match with it some music to go along with the look and feel of your efforts.

Shoot something festive and you

will get some upbeat sounds. Take something a little more serious and Samsung will match that as well. The music can be adjusted as necessary.

Many are familiar with Snapchat’s Bitmoji app. The S9s have something similar called AR Emoji. It will take your selfie and turn it into an emoji sticker. Hair and clothing can be customized. Glasses and other accessories are easily added. You can appear as a bunny or cat as well.

No matter your emoji taste, it all shows up in 18 preset GIFs attached to the keyboard.

Need something translated Evolutionary Than Revolutionary?

The phones can help with that too. Similar to Google’s Translate app, you can hold it up to a sign and get a translation in your native language. The app works in 54 languages.

Not to be outdone by Apple, Samsung’s phones boast improved facial recognition called “Intelligent Scan”. Now facial recognition is blended with a scanner. A new tool enables you to open the phone with your iris or full face depending on the sunlight.

Audio is touted to be crisper and louder on the stereo speakers tuned by AKG. Samsung claims the sound is 1.4x more powerful than previous Galaxy phones. Dolby Atmos technology will provide a multi-dimensional, theater-like sound experience.

A gray option will be available later.

While several upgrades make the phones more versatile and more fun, there is less of a wow factor than in debuts by other products. Still the new S9s add enough pop to provide a real Android based challenger to the Apple X and other competing mobile devices.

George Rosenthal is a founder and partner withThrottleNet Inc.. ThrottleNet offers an array of technology services and products to help business owners achieve their corporate goals and accelerate business growth. These include cloud computing, custom software and mobile application development, and outsourced Managed Network Services which helps companies improve their technology uptime and IT capabilities while,