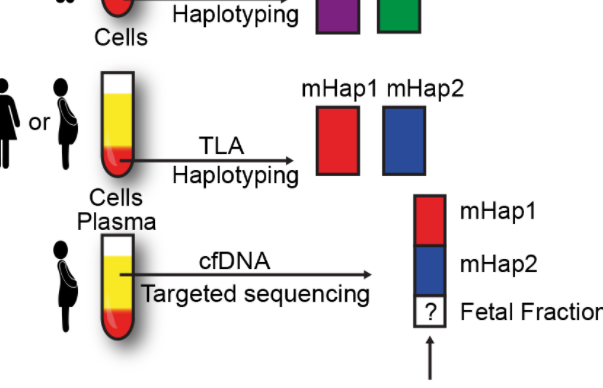 Amniocentesis is a procedure that expecting mothers dread. Fortunately, it might soon be a thing of the past as genetic blood testing could take its place. Scientists have now discovered that all mothers need to take is a simple blood test to determine the risk of genetic mutations in their unborn child.

In fact, there have been two procedures reveal within the past month that both involve blood testing in order to determine the genetic make-up of the fetus.

The most recent of the two tests is the Genetic:

Method because it does not require the identity of the father to be known, nor does it require a sample of the father’s DNA. Considering that in 3% to 10% of the births in the U.S. the paternity of the father is either unknown or mistaken, this is a very good thing. Of course, as with any new technology or procedure, it can be a mixed blessing. On the one hand, a greater number of mothers who know something is wrong with their unborn child might opt for a termination of the pregnancy.

On the other hand, when an abnormality is detected ahead of time, the child can be helped sooner and have a better chance at leading a normal life.

Many would argue that the benefits outweigh the drawbacks. Genetic blood testing can determine whether there is something wrong. With the fetus by the end of the first trimester. Prenatal surgery would allow doctors in special hospital facilities to treat. Certain conditions prior to the baby’s birth.

Genetic testing would allow the mapping of the genome of the fetus.

Which can reveal mutations that cause any one of 3000 disorders that can inherit.

Of course, there are controversial aspects to being able to map the genome of an unborn child. Chinese and Indian parents have been using. The simple ultrasound for many years to determine the sex of the unborn child. Resulting in the abortion of around 1.5 million female fetuses each year. When parents can find out the genetic make-up of their child. What is to stop at least some of them from deciding to abort simply. Because they don’t like certain traits their unborn child possesses.

What if there is only a possibility of a disease?

What is the child to be totally healthy? These are questions that must answer because being able to pull. That much detail from the unborn child’s genome is a huge responsibility. Changes are happening at what seems to be light speed. It is often difficult to comprehend what those changes really mean.

It is often difficult for the medical community to keep up. Regardless, at the very least, the blood testing means that women no longer have to the risky procedure of that in and of itself is a great relief.