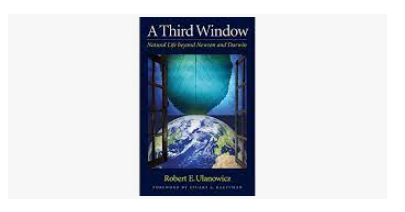 This is a review of the book Ecology: The Ascendent Perspective, Robert E. Ulanowicz.

Ecology: The Ascendent Perspective, first published in 1997, is in many ways a more accessible and more philosophical follow-up to Ulanowicz’s groundbreaking but highly technical Growth and Development (1986), and can also be viewed as an intermediate book between this earlier technical text and his later book A Third Window: Natural Life Beyond Newton and Darwin (2009), which is primarily philosophical. It is intended for a scientific audience, and is not a pop-science book, but it is quite accessible, and will be an easy read for career scientists in any field, as well as motivated, science-minded undergraduate students.

based theory of how ecological systems grow and develop, but without going into as much depth about the mathematics. It is primarily a book of ideas. The book also explores the philosophical and historical underpinnings of the ideas, which I personally find are much more important than the specific theories themselves. Ulanowicz seems to know full well that his theories are a bit raw and unrefined, but I think that the philosophical points he makes are rock-solid and show deep insights that go far beyond what most scientists have to offer. While there are many grounds on which Ulanowicz’s theories can be criticized, it is hard to argue with the big-picture themes he presents, which show a deep awareness of cultural and societal influences on scientific research, and the innate limitations on what types of questions can be fruitfully asked and answered in a scientific context.

My story of reading this book is quite personal and bizarre.

In the fall of 2001, I was enrolled in Oberlin college, where I was in my senior year, majoring in mathematics. This semester, I was taking a private reading in the Biology department, on the topic of systems theory as it applies to biology and ecology. On September 11th, 2001, early in the morning, I secluded myself in one of the higher floors of Oberlin, and set out to read this book. I read a large chunk of this book in one sitting, and I can say, it produced a revolution in my world-view, an unfolding of new ideas which has continued to this day. When I left the building to take a lunch break, I was shocked to hear about the terrorist attacks that had recently taken place. This day was truly a worldview-changing day for me, in more ways than one.

I recommend this book as a must-read for anyone studying any of the following subjects: ecology, networks, philosophy of science, and systems theory. The book will be of particular interest to anyone who is interested in questioning the dominant paradigms of science, and anyone who wishes to become more of a systems thinker or who wants to think more in terms of networks. The book may even be useful to economists or people interested in adopting a more systems-based approach in business, public policy, or other fields involving systems of people. The style is lively and the book is thought-provoking. And it’s a surprisingly easy read, given how deep the repercussions are of the ideas contained within.

Alex Zorach worked as a research assistant with Robert Ulanowicz

during the summer of 2002, and co-authored a paper with Ulanowicz on the topic of quantifying the number of roles in flow networks. He currently is working on a variety of different projects, and writes prolifically about religion, politics, economics, psychology, and a broad range of other subjects. He is the founder and editor-in-chief of RateTea, the first online community where anyone can rate and review teas, with a searchable database of teas and herbal teas, classified by brand, style, and region. RateTea has a wealth of information about tea, health, sustainability, and related topics.