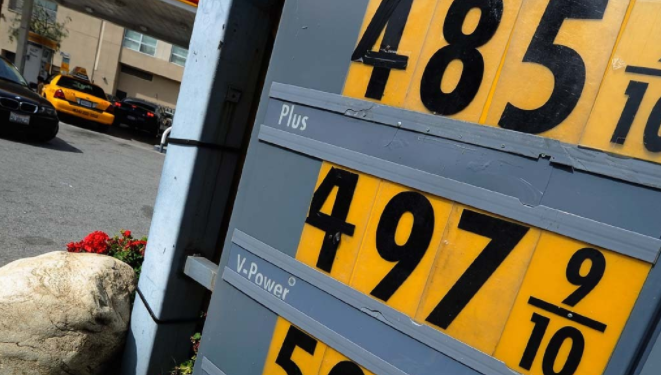 The price that matters is how long you have to work to drive your car 100 miles. “Gas prices are the highest they’ve ever driving!” screamed a recent headline in the Los Angeles Times. “Pain at the pump drives Biden’s suffering in the polls!” trumpeted Politico. Really? About time to remind folks that by historical standards, it’s still pretty cheap to drive your car. How could that be? Let me explain.

Being driving than most people who will read this:

I can remember when I could fuel up my first car, a ’46 Plymouth, for 25 cents a gallon. The good old days? Think about it. That old Plymouth, with its underpowered straight-six engine. 3200 pound curb weight, only got 15 miles per gallon. My summer job driving a farm truck paid just $1 an hour. Do the math, and you’ll see that means I had to work exactly 100 minutes. The better part of two hours — to buy enough gas to drive 100 miles.

By any common-sense standard, that is the real cost of gasoline — the number of minutes you have to work to drive your car 100 miles. By that standard, the good old days of cheap gas don’t look so good after all.
Go farther back, and it gets even worse. A hundred years ago, your great-grandpa probably drove a Model T Ford. If he was an average factory worker, he would have earned 47 cents an hour. His Model T would have gotten something like17 miles a gallon and a gallon of gas would have cost 25 cents — about the same as a pound of steak at the butcher’s. Do the numbers, and you will see that your great-grandpa had to work 187 minutes — more than 3 hours — to drive 100 miles.

Cars were faster and safer. You didn’t have to hand crank them to start the engine, so a lot more women were driving. Your grandma may have driven a Model A. If she was lucky enough to have a good factory job, she would have earned about 75 cents an hour. Gas was cheaper by then, about 20 cents a gallon, but the Model A only got 14 miles a gallon. That comes to just under 2 hours of work to drive 100 miles.

By 1950, wages had risen a lot. The average worker — not a kid with a summer job — was earning about $1.50 an hour. The average price of gasoline was 30 cents, so an hour’s work would buy you five gallons — a big improvement from the prewar days. But cars, bigger, heavier, and faster now, still only got about 15 miles per gallon You still had to work well over an hour to drive 100 miles.

The average car on the road gets about 25 miles per gallon. An efficient new car like a Mitsubishi Mirage — even with an internal combustion engine — gets 40. The average wage of production and nonsupervisory employees was over $26 an hour in November 2021.

Sure, gasoline costs more than it did a year ago: $3.72 as of Thanksgiving week vs. $2.25 in 2020. But even at those headline-making prices, it still only takes 34 minutes to earn enough to drive 100 miles. It took almost as many minutes per 100 miles as recently as 2018, and way more than that in every year from 2005 to 2014.
Here is the whole picture, including a few estimates for earlier years and complete data from 1964 on:

So, keep a copy of this chart in your pocket. It might come in handy the next time you hear someone griping about the high price of gasoline.