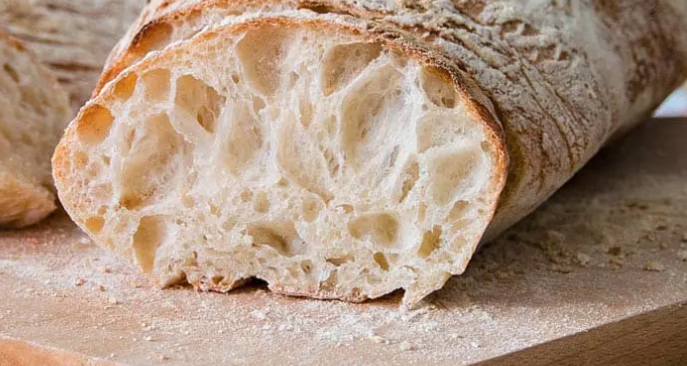 When it comes to bread, there are numerous Italian bread recipes coming from the various regions of the country. Ciabatta The flavors are as varied as the regions themselves, and are beautiful accompaniments to the different main courses. However, there are few types of bread that are as popular outside of their native country as the ciabatta bread. And this delicious Italian fare can be easily created in your own kitchen.

Ciabatta bread actually has two main stages. First there is the starter, known as the biga, and second is the dough itself. To make the biga you will need 170 grams (about 6 ounces) of flour – strong white bread flour or doppio zero flour will both work.

To the flour you will need to add about a quarter packet of dried active yeast, a small amount of olive oil, and 100 milliliters (a little over 3 ounces) of warm water. Kneed these together to form a soft dough, and continue to knead for five minutes. Remove the dough from the bowl, coat the bowl with olive oil, and place the loaf back in it, turning so that the dough receives a coating of olive oil. Allow it to sit overnight in a warm part of the kitchen.

In the morning you will be ready to create your ciabatta. In another bowl, combine 450 grams (about a pound) of flour with a packet and a half of dried yeast. Add to this a couple of grinds of salt and 350 milliliters (about a cup and half) of water. Kneed this together, and when it starts to form add in the biga that you prepared the night before. Mix the two together so that you have dough.

You will want to remove the dough from the bowl, coat the bowl in oil, and return the dough, turning several times. Allow the dough to rise for about three hours, and then place it on a floured surface to punch it down and kneed it for another 10 minutes. Then you will be ready to place it on your baking stone or tray and shape the dough into shape.

Preheat the oven to about 430 degrees Fahrenheit and allow the bread to bake for 10 minutes on the top shelf. Afterwards turn the oven down to 375 degrees Fahrenheit, move the bread down to the lower shelf, and bake for an additional 40 minutes. This should give you the distinctive hard crust and chewy middle that is associated with ciabatta bread.

A close cousin of ciabatta is focaccia, and this bread is easy to make on your own as well. For focaccia you will skip the biga stage entirely. Combine 750 grams of flour (about 26.5 ounces) with a packet of yeast. To this you will want to add a little salt, some olive oil, and 500 milliliters (a little over two cups) of water. Knead the dough thoroughly, stretch out on an oiled baking sheet, cover with a damp towel, and allow to rise for two hours. Remove the towel, punch the bread down, recover, and rise for another hour.

After the bread has risen, make shallow indentations with your thumb, and cover the dough with a generous amount of oil. If you would like, sprinkle with herbs, olives, sun-dried tomatoes, or even pesto. Bake for 15 minutes at 450 degrees. No matter if you prefer ciabatta or focaccia, these bread recipes are easy to recreate at home.