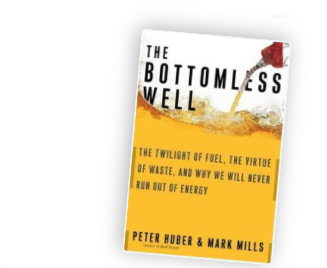 For anyone who has any interest in energy, its cost, future and the political debate over this precious resource- The Bottomless Well is a must read. This book is an intriguing insight to the other side of what most of us have been led to believe on the environmentalist monopoly of the subject. The Bottomless Well makes the case that most of the things we think we know are mostly myths- because we really don’t understand what the essence of energy is in the first place. The book demonstrates how a better understanding of energy will radically change our views and policies on a number of very controversial issues. The Bottomless Well also explains why demand for energy will only continue to increase, why most of what we believe is “energy waste” actually proves out to a benefit for all; why more efficient vehicles, engines, and light bulbs will never lower demand, and why the earth’s energy supply is actually infinite.

that that the cost of energy has increasingly less and less to do with the actual cost of fuel. With roughly five percent of the world’s population, America consumes over 25 percent of the world’s natural gas, 43 percent of its motor gasoline, 25 percent of its crude petroleum, 23 percent of its coal, and 26 percent of its total electricity production. But the book points out that most our energy consumption isn’t for locomotion, lighting, or cooling. What we use energy for, mainly, is to extract, refine, process, and purify energy into ever higher states of efficiency. The more efficient our technology, the more energy we actually consume; not save, because the cost to reward ratio is so positive for the consumers of this highly refined energy. The book also point out that the competitive advantage in manufacturing will soon be shifting decisively back toward the U.S.: the human demand for energy will only continue to grow and is indeed insatiable; raw fuels sources are not running out; and America’s relentless pursuit of high-grade energy does not add chaos to the global environment but rather restores it to order. Indeed, expanding energy supplies mean higher productivity, more jobs, and a growing GDP. Across the board- energy isn’t the problem, energy is the solution.

While the conventional wisdom holds that energy

consumption is the problem and certainly some would disagree from an environmental impact concerning (at lest fossil fuel) energy consumption, The Bottomless Well argues that from an environmental perspective it also makes sense to use energy in an ever more efficient state. For example America, unlike most of the poor developing countries, is a net carbon sink. That is, despite all the pollution produced in America, there is more CO2 PPM upwind of America on the Pacific side then there is downstream of it over the Atlantic. This fact is undisputed, but although the book does offer some anecdotal reasons why this might be the case there is no definitive evidence to explain this unexpected phenomenon.

I would strongly recommend The Bottomless Well to anyone

no matter where they might stand on the issues of energy, the environment or politics. The book breaks the mold on many of our conventional views of energy, how we use it and why. At very least The Bottomless Well opens the door to another school of thought, not to mention a healthy debate about energy policy and our future.

John is the founder of several successful Internet technology companies including the Book Price Comparison website CompareBook.com [http://www.CompareBook.com/]. As a pragmatist of the world around him, he is both a critic and crusader on international politics and energy policy as it relates to our security and our impact on the global environment.

Visit CompareBook.com to read reviews, find similar titles, and search for the lowest possible price for The Bottomless Well and other great books.

Book Review: The Bottomless Well - Why We Will Never Run Out of Energy