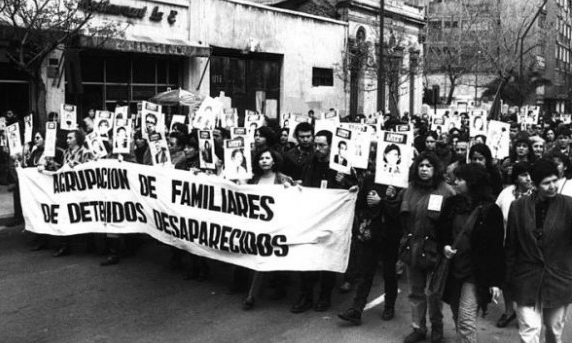 The Argentine Mothers of the Plaza de Mayo is a well-known group in Argentina. The organization consists of women whose children disappeared during Argentina’s Dirty War. This “war” was a campaign of violence carried out by the country’s military dictatorship between 1976 and 1983.

Today, the Mothers of the Plaza de Mayo continue to search for their children, and you will probably hear more about them while taking Spanish classes in Buenos Aires.

One of the goals of the Argentine mothers:

This organization is to find their lost children and reunite with them. They initially gathered in the Plaza de Mayo, and that is how their organization got its name.

The first demonstrations took place in 1977. Later that year, one of the original founders of the organization, Azucena Villaflor de De Vincenti, disappeared. She had been searching for her son and daughter-in-law for 6 months. Sadly, she was taken from her home by armed forces and sent to a concentration camp. In 2005, her body was identified. Three other founders of the movement have disappeared as well. If you attend Spanish school in Argentina, you can easily visit the landmark at the center of the Plaza de Mayo where Azucena Villaflor de De Vincenti’s ashes are buried.

Even today, the Argentine mothers:

Continue to gather every Thursday afternoon. Students who sign up for Spanish classes in Buenos Aires often see these women walking around in the Plaza de Mayo with white headscarves. On these scarves they embroider the names of their children.

During the Dirty War, government agents abducted many people. Quite a large number of these people were not only abducted, but also killed. There is some controversy about how many people are missing. According to the military in Argentina, 9000 kidnapped people are still missing. The Argentine Mothers of the Plaza de Mayo feel that number is far higher. In fact, they believe that about 30,000 people are missing. A government commission has released facts indicating that the number is closer to 11,000. Regardless of the exact number of missing people, the Dirty War was clearly a travesty.

Argentine Mothers of the Plaza:

Mayo have since split into two factions. One is the Mothers of the Plaza de Mayo Founding Line. This part of the organization works on establishing legislation to help recover remains of deceased individuals. They also seek to prosecute ex-government officials. Currently, you can see this group march every Thursday.

Another Argentine faction called the Mothers of the Plaza de Mayo Association is more political. They do not accept help from the government and instead seek for the government to take the blame for this tragic situation. They want to see the country’s political culture change dramatically.

When you attend Spanish school in Argentina:

You can conveniently visit the university, bookstore, library and cultural center that were put together to honor the memory of the people who disappeared. Often famous leaders visit this center when going to Buenos Aires. A variety of programs offer various services to the community including free education and health care. These memorials are powerful tributes to the men and women that were killed during the Dirty War. This is a sad part of Argentina’s history, and it is one that is worth recognizing.