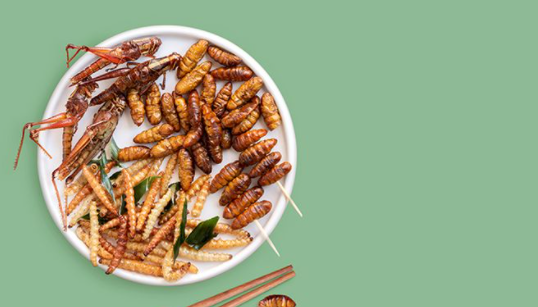 One of the most convincing arguments why you should consider eating, is from a health point of view. Insects generally are very high in protein, beneficial fats, vitamins, minerals and all essential amino acids.

Vitamin B12 for example is not available from plant sources, and many vegetarians and vegans are deficient in this. Insects are a great source of Vitamin B12. Nuts and pulses, though very healthy in other nutrients, lack this essential vitamin.

The combination of un- saturated omega- 3 and omega- 6 fatty acids is also high and comparable to that found in fish, which is higher than in pork and cattle.

As most insects are eaten whole, unlike conventional meat, the entire exoskeleton, muscle tissues and vital organs are consumed. This is part of the reason for the high micro- nutritional value of insects.

Farming insects requires less land than farming traditional livestock. In fact, insects even like to be confined to small spaces, which can be seen in the way the cluster into certain patterns. Furthermore they can be stacked vertically unlike bigger animals.

If you compare the weight of protein produced with other livestock, insects require 2 to 10 times less space. Traditional livestock is presently occupying two thirds of the worlds’ land masses, and are the cause of some of our biggest environmental challenges. Climate change, over- fishing, pollution caused by fertilizing as well as pesticide use, are all reasons why the environment is being maxed out and something needs to change.

Insects produce significantly less CO2 and ammonia emissions than cattle, pork and chicken. The reason for this is the much shorter lifespan of insects, which means less resources are required. In the case of crickets, they are fully grown at about 8 weeks. Compare that with cows, which are considered adults at about 2 years of age.

Insects are furthermore cold- blooded, meaning increased efficiency at converting food into protein. To produce the same amount of protein, crickets need 12 times less food than cattle, and only half the amount than pork and chicken.

Insects require less feed than other livestock, and about 80% of a cricket is digestible. This is most likely due to the fact that insects are cold- blooded and therefore don’t need food to stay warm. Insects also require significantly less water compared to cattle, pork and chicken.

Because insects are easy to please gastronomically, they can live off organic side streams like manure and compost. This in turn decreases environmental impact and adds value to waste products.

Insects could be fed biowaste, and in turn processed and fed to larger animals, which again could be sold to the consumer. Insects such as the black soldier fly, the common housefly and the yellow mealworm, are extremely efficient at converting organic waste, and estimations say that they could convert 1.3 billion tonnes of biowaste per year. Unfortunately this process is not yet allowed due to present and outdated food & feed legislation.

Insects are further down the food chain than other livestock, and don’t have many animal welfare issues associated with them. This could potentially be an argument for vegans and vegetarians to consume them, especially as they are high in Vitamin B12, which is not obtainable from plants.

Diseases like foot and mouth disease, H5N1, avian influenza and bovine spongiform are less likely to be transmitted from insects to humans, because insects taxonomically are much more different than bigger animals. In recent years we have seen a rapid increase in these infections, likely caused by climate change as well as the intensification of animal production. However, more research is needed in this area.

Rearing insects is easy and cost- efficient at Insects

Farming insects is easy to learn and doesn’t require a lot of training or resources. Because the life- span of an insect is much shorter than traditional livestock, coupled with the fact that insects reproduce extremely quickly, this also results in quicker economical benefits.

No use of antibiotics, pesticides, GMO or hormones

Insects do not require antibiotics, the use of which especially in the poultry industry has led to a lot of debate. Excessive use of antibiotics can lead to bacteria, which become resistant, and in turn become a worrying danger to humans.

The use of pesticides is also not necessary, which logically is better for the environment and human health, as well as being more economical.

The same can be said for GMO and artificial hormones, all of which become superfluous when farming insects.